Israel and South Africa: The Many Faces of Apartheid 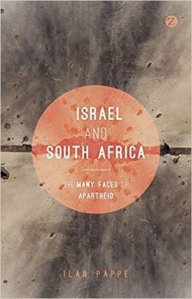 This collection, asserts editor and renowned historian Ilan Pappé, doesn’t revolve around making a case that Israel operates as an apartheid state. Rather, it considers it as a starting point, explains striking manifestations of apartheid in Israel and fleshes out its use as a comparative model with apartheid South Africa. Basic legal and legislative comparisons between South African and Israeli apartheid, contributors explain, include nationality or race laws excluding non-Jews or non-whites from privileges of full citizenship; land and property laws making it illegal to own or lease land and homes, except in certain areas; identity cards based on strict racial or ethnic classification, limiting freedom of mobility, including the right to live, work, study and be buried where they wish; and, laws affecting mixed marriages.

This legal framework applies to all Palestinians, whether they live in Israel or the Occupied Territories or are refugees. Taken up by journalist Jonathan Cook, who has written a number of books on the Israeli-Palestinian conflict, among others, one of the major arguments within this comparative framework questions the “artificial separation” between Palestinians in Israel and those in the Occupied Territories in assessing the criteria for apartheid in terms of ideological premises, historical trajectory and exploitation of labour.

The collection reveals a diverse range of contributor voices. The first essay by Ronnie Kasrils, a high-ranking member of the African National Congress and Minister of Intelligence in post-apartheid South Africa, begins the section “Historical Roots”. He draws attention to 1948, a devastating year of erasure for both black South Africans and native Palestinians. At this time, while the stage was set for decolonisation in Africa and Asia, “May 1948 marked the election of the apartheid government, consolidating over three centuries of colonial conquest and subjugation, and the prelude to a forty-six-year maelstrom” for South Africans. For Palestinians, 1948 put in motion an “era (Al-Nakbah) of brutal dispossession…, resulting in expulsion … and the displacement by an exclusivist Jewish settler state… declared on 15 May that year.”

Most striking about the essays are their explorations of the unique ways in which each government developed apartheid despite sharing it as a common form of governance. As Kasrils points out, segregation was maintained in both countries, but each economy created a system where the use of labour and its spaces determined how confinement and segregation played out. For example, despite the restriction of black South Africans to Bantustans, the economy’s dependence on black labour led to an emergent urban black proletariat that was, albeit with constraints, “ever present in the mines, factories, farms and kitchens of ‘white South Africa’”. Israel, however, has tried to completely excise Palestinians from the labour market in favour of workers from afar, which has led to a form of segregation and subsequent confinement to specific territories more acute than in South Africa, according to Kasrils. The goal of smothering the economy of the Occupied Territories is, of course, to drive its remaining residents out.

Continuing the historiography of apartheid, Pappé’s essay goes beyond South Africa to widen the scope of analysis, arguing that Zionism is comparable with 19th-century colonialisms, most distinctly the “modern Christian colonisation of Palestine in the first half of the nineteenth century and that in Africa as a whole.” Israel’s founding nationalist aspirations, according to Pappé, do not mitigate its colonialist projects of dispossession and occupation. The last essay probing apartheid’s foundation by Oren Ben-Dor reviews its theological justifications, while reflecting on the taboo of discussing Judaism with regard to Zionism, a doctrine of “‘essential separateness’ locat[ing] the Palestine case in a unique historical context.”

The section ambiguously titled “Nuanced Comparisons” promises to be the most incisive exploration of narrative control over Israeli and South African apartheids. First, Anthony Lowstëdt provides an astute analysis of the intersection of racism and sexism in instrumentalising narratives about femicide. For example, it can publicly be attributed to a claim of Palestinian societal backwardness that an Israeli social project promises to counteract. More privately and clandestinely, though, informants try to control communities via threats based on honour narratives.

Lowstëdt claims rightly, “The Palestinian preoccupation with morals, from courting and sexual morals to the ethics of punishment, prevention and protection, keeps the genders from dealing with the apartheid oppression and liberation from it.” What he doesn’t emphasise enough is that while certainly always influenced by racist sabotage and infiltration, communities also have some agency to diverge from such honour narratives. However, this doesn’t mitigate this significant discussion of a particularly voyeuristic, bigoted misogyny disguised as outrage on behalf of women, which is significantly far-reaching in today’s Islamophobic climate affecting Muslim women globally. This translates often to pointing out systematic injustices against women, insofar as to damn a whole society rather than to help or even express sympathy minimally for any women affected. Lowstëdt explains that “culture”, too, was often a justification for perpetrators of femicide in South Africa, but his analysis of South Africa appears wanting, a criticism that applies to other essays in the collection.

Unfortunately, rather than being a symmetrical comparison of both apartheid systems, apartheid South Africa as a topic is explored at a minimum level and often as a methodological tool against which Israeli-centred discussion is looked at. While analyses of South Africa were lacking, the collection is heavily researched and attentive to apartheid as a comparative model from various theoretical perspectives. As such, regardless of its flaws, its immensely thoughtful arguments and varied topics and approaches will benefit scholars and journalists of the region as a valuable reference.