This is Not a Protest: Ironic Dissent in Post-coup Egypt

(View at The State) 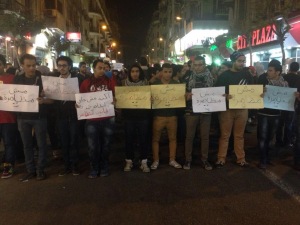 On November 30th, crowds gathered in Cairo in a protest that denounced itself as a protest. Ironically gesturing toward the new anti-protest laws, protesters carried signs claiming “this is not a protest.” Although authorities have announced that this law only targets protesters defying peaceful demonstrations, police have violently repressed peaceful protests. In post-coup Egypt, a schoolboy has been detained for bringing a ruler to school with the Rabaa sign (a four-fingered salute on a yellow background signaling anti-coup stance), and fourteen women and girls—some as young as fifteen—have been jailed and sentenced for passing out yellow balloons in support of ousted president Morsi. These images and signs have undeniably traveled worldwide and have had their own repercussions even in Morocco, where men wearing t-shirts featuring the Rabaa sign were arrested at a football game.But the flow of signs is not asymmetrical; it runs both ways between the state and its subjects. That is to say, the interpellation of the individual by the state can be “imagined along the lines of the most commonplace everyday police (or other) hailing: ‘Hey, you there!’” (as claimed by Althusser). By merely acknowledging and turning around, the individual becomes a subject of the State in recognizing to whom the hail was addressed (her and no one else). If we were to conceive of protest as inverse interpellation, then protesters would be the ones subjectifying the State through the symbolic gesture: “Hey, State!” The response of the State (police via repression or politicians who work to release or keep jailed political prisoners) would then in turn subjectify that which protestors represent: a certain image of the Egyptian State. In this way, protest as a demonstration of State’s subjectivity and vice versa only underlines the protestors’ relationship with the State. That is, the State is not only constructed through the police as it legitimizes its power, but equally perpetuated by those protestors in opposition or in defiance of it.

However, this ironic display denouncing protest as protest bypasses the State and seeks phatic communication with others. The November 30 protestors are not asking for certain rights from the State, but asking spectators to watch how they disengage from the state. Or rather initially engage only to then dismiss the state, and undermine the process of not only seeking permission to protest, but for any other rights. The protests are also hailing the state (“Hey, State”), but simultaneously dismissing the legitimacy of any state response with signs declaiming protest (“This is not a protest”).

Evoking Magritte’s ‘Ceci n’est pas une pipe’ as a warning of the gap between the optical illusion and the real object, the protestors hold up the disclaimers “this is not a protest” to demonstrate the difference between the reality of Egypt under a military coup and the illusion perpetuated by governments worldwide that “this is not a coup.” The ironic protests create a community of consciousness, with observers inside and outside Egypt, that shares in unraveling the disclaimers from the ‘inside’ (insofar as irony creates a empathic space of communion and insofar as it parasitically relies on the structure it interrogates). The protest’s ironic display creates an interactive, phatic space to engage with the present meaning of Egypt’s official State narratives (“this not a coup”) to extract the absent meaning of criminalizing dissent in the face of an unacknowledged state narrative (“this is not a protest” to the coup). It thus redefines the rules of engagement with a State that has created irreconcilable realities between which meaning and signification get cut off. In a surrealist gesture, the protestors hold up a mirror to the State and the schizophrenic realities it has created, questioning the absurdity of violence detected in a schoolboy’s ruler and balloons, inasmuch as inviting questions about the absurdity of carrying signs disclaiming protest amidst the reality of a protest.